The creator of Michael Jackson dangerous album cover was the artist Mark Ryden. It took him six months to finish Michael Jackson dangerous artwork. Much of the life of Michael Jackson is reflected in it both in pictures as symbols. Mark Ryden was born on 20 January 1963 in Medford, Oregon, California. In 1987 he received the School of Design in Pasadena. Among his clients were Stephen King, Leonardo DiCaprio, Robert De Niro. Michael Jackson hired Mark Ryden because he was a fan of circus posters from the early last century, and had the mentality to interpret the images they wanted Jackson on the cover. The account cartoonist asked Michael very specific things, and he also drew his own analogies to make room for these symbols. Michael told Mark that the design should be mysterious and that people will interpret it in their own way. 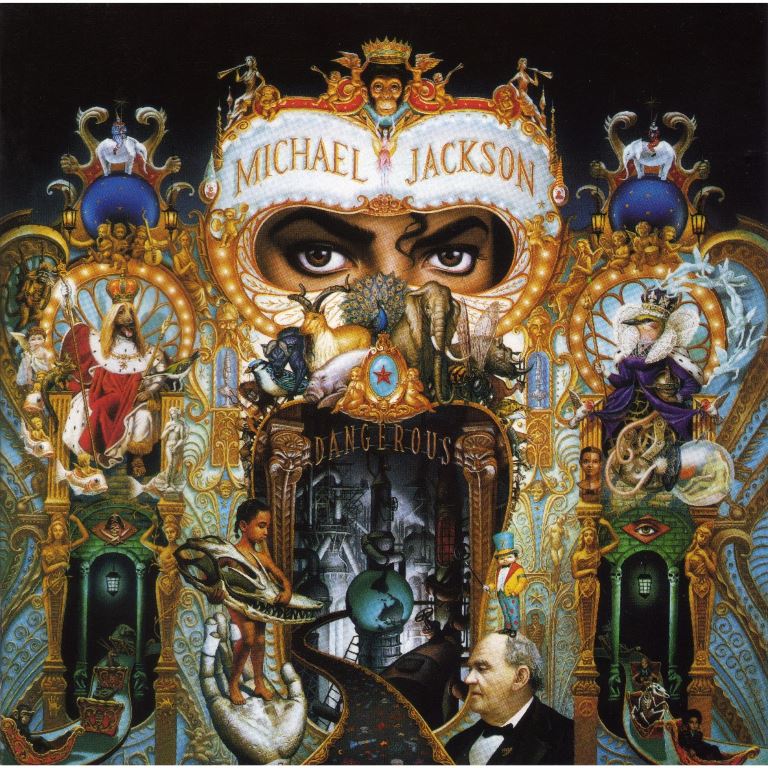 1 – The name “Michael Jackson” on his eyes gave way to a huge theatrical mask that seems to want to cover everything. From that center dominates the scene perfectly. Eyes and perfect eyebrows with a small lock of hair falling from his forehead and brown skin, make the perfect ornament for domination.

2 – On a fairy appears the head of a monkey about to be crowned. It is his chimp Bubbles who was rescued from a cancer research facility back in 1985. It’s noteworthy that all of the work environment is practically covered by animals.

3 – Right in the center are grouped various animals: a peacock, accurate representations of glamor and gorgeous as is usually the entertainment world, an elephant with a number 9 on the front (as that number next to 7, the most prominent in numerology), a rhinoceros, a walrus, and so on.

4 – On either side of Michael’s eyes are two faces of clowns with bonnets. Both represent the circus but also the theater and who are in the classical view of theatrical performance, one crying and one laughing.

5 – Two musical cherubs appear on both sides of a star of good fortune, announcing the sound and music.

6 – A prehistoric man, perhaps a warrior tribe (seniority is an obsession for Michael Jackson). In his hands accompanies this great concert with two dishes.

7 – More angels appear in the left of the image, this time an angel and smaller child in a few fish in the style of living carrousels or uncles.

8 – An entry to a kind of “ghost train” or “labyrinth of terror.” Onboard the cars are again the monkey “Bubbles”, a rat can be “Ben”, a antipolo and an elephant. This entrance is flanked by a classic pirate symbol denoting evil but turn the adventure, so present in these passages.

9 – On the left is a half-open hand, which is Michael Jackson because on three fingertips are the classic “bandaids”. Standing on your palm is a black child holding the skull of the elephant man, whose remains wanted to buy but could not. On that Palm appears drawn a world map depicting the presence of Michael Jackson as a worldwide star. On the wrist is the number 7, as I had said next to 9 are special numbers in numerology.

10 – In the bottom center of the scene is a kind of galactic belt surrounding a world upside down, you have on your floor a lot of symbols that represent hazards as caravels and pistols, technological advances such as rockets and mysteries of science as atoms and chains of particles.

11 – Here is the image of Barnum, creator of the world’s most famous circuses, is an explicit homage to this cover very “circus”. The bust is in the jacket lapel a pin with the number “1998” and if we add 1 +9 +9 +8 the result is 27 (the seven positive number in numerology) and adding 2 +7 gives 9 (the other number positive).

12 – The output of this “corridor” or “ghost train” since the end of the story everything has changed. Bubbles disappeared and instead sits with Michael but his image of child star, behind him the skeleton of the elephant man (whom we spoke) behind his friend happy Macaulay Culkin and closing the antipolo row ends up being another skeleton.

13 – An eye Greek appears on the upper facade of the exit of the maze. It is a symbol of protecting God who sees everything.

14 – Michael gr an admirer of the masters of world painting has added two dinner s classic is one inside a crystal ball and the other on one of the pillars of the Afghan king dog described below.

15 – In the middle of the table on the right is the image of an Afghan dog on his throne. The image is inspired by a painting “Napoleon on his Throne” painted by artist Jean-Auguste Ingres in 1806. The painting is housed in Paris in the Museum of the army which also surveys the work of Napoleon ba tum.

16 – There are two other figures that are part of the Dangerous cover that is included in the luxury three-three-dimensional version is a two-legged dog and a girl with the entire body in his arms holding a large green beetle e. Undoubtedly the cover of “Dangerous” by the cover design of “Sergeant Pepper” by The Beatles is the most performed two covers in music history.

17 – At the bottom of the cover, you can see the image of Aleister Crowley, an influential English occultist, astrologer, a mystic, and ceremonial magician. Read more about him here.

Account Mark Ryden, artist of the cover of “Dangerous” that had previously worked with the Art Director for Sony, Nancy Donald in many other projects, and when the project was commissioned by Michael Jackson she thought of him.

Michael Jackson showed him a book about their jobs and liked it a lot. Ryden was thus that he met with the King of Pop in his study where he could hear some of his new music and talked about the idea.

He then had a week to create some strokes, doing 5 pencil drawings. Only one was elected, the current draft of the lid.

The other four sketches were not accepted by Michael Jackson but had the same general style that the cover of “Dangerous”. One was a circus poster with a skeleton jumping from the innards of a clown, another was focused on a girl in her hand she held a skull, another idea was very similar to the final cover, but the scene was set outdoors and the Michael Jackson’s eyes were mixed with clouds over the chimp Bubbles which was standing on a pile of animals.

Mark Ryden also notes that the first sketches of the cover of “Dangerous” drew heavily on the video for the song “Leave Me Alone” found in the feature film “Moonwalker”, saying that “it was the image, design and the items were great. ”

The cover of “Dangerous” was the biggest project Mark Ryden asked what date he demanded six months’ hard work. Although the original painting is very large, the great challenge of the artist was that by reducing the size of a cover of a compact disc detail and the concept did not disappear.

One of its inspirations to the many details was listening to the tracks on the album as Michael Jackson was finishing his recording and song titles also served to introduce certain concepts. And so the album title and the song “Dangerous” provided a starting point for the base of the drawing.

Mark Ryden said that despite the great advances in digital technology, the drawing is not supported by computers and nothing is done the old way, only brush with acrylics on a panel, which still remains in its original study, without I was asked by Michael Jackson or the art division of Sony Music, as the latter only bought the reproduction rights. Ensures the artist that anyone else could buy your original drawing.

As for the freedom to create his work, Ryden had the opportunity to draw without pressure, except for some very specific added that Michael Jackson asked himself near the end of the work. For example, he wanted the actor Macaulay Culkin to be in one of the cars that pull out of the tunnel on the right and placed the pin “1998” on the lapel of P. Barnum.

Dangerous was the first of these albums in which Michael Jackson talked openly of racism, which was the main topic with the hit song, “Black or White”. Other social-commentary topics that Jackson had never touched as a solo artist including poverty and inner-city life were discussed in the song “Why You Wanna Trip on Me”, in which he compared social ills to his own alleged publicized eccentricities that were covered in the press at the time asking critics and tabloid media why were they focusing on him when other more social problems were going on. He addressed similar issues in the album’s opening track, “Jam”, which included rapping from Heavy D. “In the Closet” had originally been set as a duet between Jackson and Madonna though this recording never happened and focused on two lovers carrying on a discreet affair without being open about the affair. The album also included songs of other personal nature especially songs such as “She Drives Me Wild”, “Remember the Time”, “Can’t Let Her Get Away”, “Who Is It” and “Give In to Me”. The social commentary “Heal the World” was in the middle of the number of personal songs. “Gone Too Soon”, written by Larry Grossman and Buz Kohan, was written and recorded for Ryan White following White’s death from AIDS in 1990. The title track’s lyrics were compared to that of “Dirty Diana” with the song focusing on a seductress. 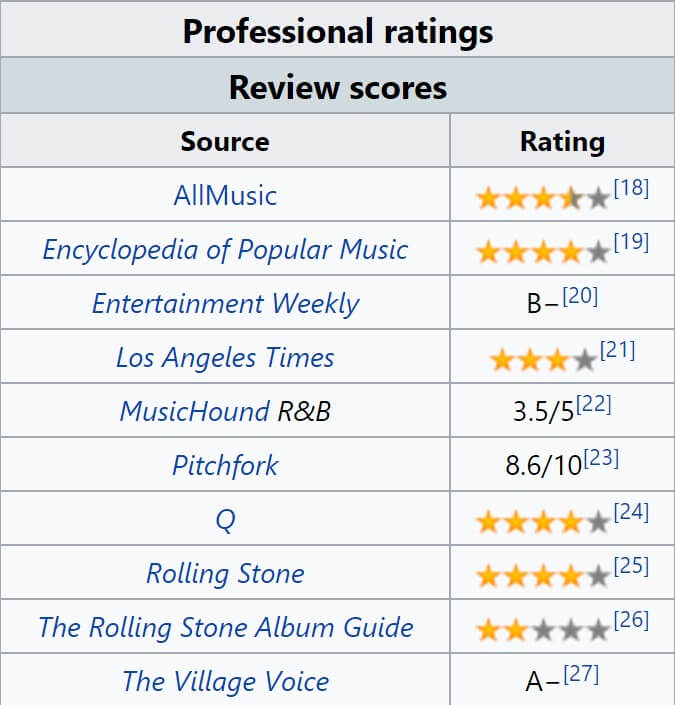